The new VertexTM is also available in a swing-away version allowing for rear vehicle access. This new hitch rack’s unique arc design makes it easier to load and unload, provides better ground clearance and gives you greater distance between your bikes for easy transport.

The Thule Vertex 9031 4-bike swing away bike rack is a hitch mount bike carrier that provides ultimate convenience as it transports up to four bicycles securely at the rear of vehicles, while allowing for full rear access to rear doors by either swinging away to the side, or leaning the unit back. Additional features include: an arc design for easier bike loading and carrying performance, increased mast height, Thule Hold Fast cradles and anti-sway cages, the ability to fold arms down flat, bike and rack security from theft with locks (sold separately), and an integrated carrying handle. 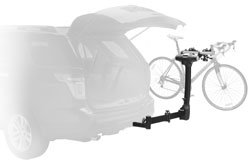 Hitch mount receiver stowage for four bikes with swing to the side action that ensures access to rear vehicle openings.
View larger.

Four-bike Carrying Capacity, and Swing Away Access to Your Hatchback

The Thule Vertex 9031 swing away 4-bike hitch rack carrier is designed for frequent cyclists and/or families that want the stability, and functionality of a hitch receiver carrier that does not interfere with use of hatchbacks. The Vertex 9031 swing away is compatible with 2″ hitch receivers and has a 4-bike carrying capacity managed by its two arched bike support arms. The naturally supportive arch design of the bike arms allows for easier bike loading and carrying performance. Thule Hold Fast cradles are installed on the arms. They feature a soft, single material cradle with a groove design that accommodates bike cables, cushions bikes and secures them during transport. In addition, straps used in cradles are 25% strong than current Thule T3 straps. To provide maximized bike stability, bike arms also feature anti-sway cages. Anti-sway cages are rigid rubberized bike rack components that attach to the lower edge of the bike arm, hanging below the bike cradle (one for each bike). As the top tube of bike frames rest on the carrier arms, the anti-sway cages attach to the vertical tube section of bike frames with included straps. This holds bikes firmly in place without the need of a heavy wheel tray sometimes incorporated into hitch mount carriers. Bikes can be locked to the carrier with a cable lock (sold separately), and the carrier can be locked to a vehicle hitch receiver using a hitch receiver lock (sold separately). 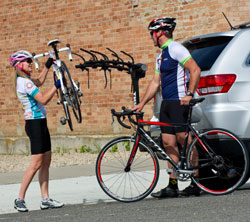 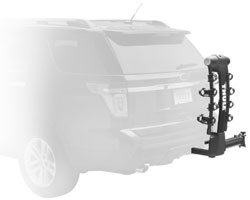 Improved hitch switch folds arms down and leans the carrier back.
View larger.

The Vertex 9031 ensures access to rear hatchbacks is always available through swing away arm and leaning functionality. Swing away arm functionality is provided by a connection between the two segments of the unit’s horizontal base, which in turn connect to the vehicle’s hitch receiver. When the Vertex 9031 is in the standard use position these two segments are automatically held together by a spring loaded joint, along with a lower locking handle and upper lockup pin combination that snap closed on contact. When the release pin is lifted up, a gentle pull of the carrier can separate the two segments, and the upright section swings smoothly to the passenger side of the vehicle, allowing hatchbacks to be opened without removing the carrier. The carrier can be held in this position for as long as necessary with the hold-open pin inserted. This ease of movement of the swing arm is the same whether the carrier is empty or loaded. To return the swing arm to its standard position simply remove the hold-open pin. The swing arm will move back into position and lock into place. The upright mast of the Vertex 9031 can also lean to the rear of the vehicle with a pull of the improved hitch switch to provide access to the rear of vehicles while the carrier is empty but attached. An added usability feature of the Vertex 9031 is the ability of its bike arms to fold down into a vertical position when not loaded. This minimizes the possibility of driving and parking issues when the empty carrier is left on a vehicle.

Listed below are some pictures of Thule 9031 Vertex Swing Away 4 Bike Hitch Rack: