The Thule 9027 Apex swing away is a four-bike hitch mount carrier for use on vehicles with previously installed 2″ hitch receivers. It is designed for cycling enthusiasts and families that want the stability, functionality and space-saving rear orientation of a hitch mount bike carrier, but not the restrictions on the opening and closing of vehicle hatchbacks that often go along with those same carriers. Features include: a “swing away” design, an integrated hitch pin, an arc arm design for easier bike loading and carrying performance, increased mast height, Thule Hold Fast cradles and no-sway cages, fold-down bike arms, locks for securing the carrier and the bikes, and an integrated carrying handle. 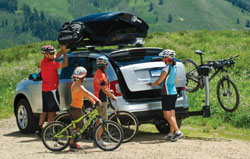 Hitch mount receiver stowage for four bikes with swing to the side action that ensures access to rear vehicle openings.
View larger

The 9027 Apex is arranged in two primary sections: an upright mast assembly with folding arms to support bikes, and a two-piece, horizontally folding swing arm assembly. Included hardware and generic tools provide for easy combining of the mast and swing arm sections, which terminates in a 2″ hitch that is inserted into the vehicle’s hitch receiver. The carrier ensures access to rear hatchbacks, even when fully loaded, through its spring-loaded mechanism that connects the two assemblies and that allows the entire unit to be pushed to the passenger side of the vehicle. As this is done the two folded pieces of the swing arm unify along a single plane, and are held in place by a tethered hold-open pin. A moveable joint at the edge of the outer end of the swing arm and below the mast assembly can also be secured in place using the carrier’s main lock-up pin. This ensures that bikes extended to the side will not pivot and make contact with vehicles. When not swung out to the side, the carrier automatically centers itself against the rear of the vehicle, the two pieces of the swing arm pressed together by spring loaded joints, which is locked in place by the lockup pin, which clicks into position automatically. A turnable locking handle positioned at a 90-degree angle to the lockup pin provides additional security when the vehicles is in motion. 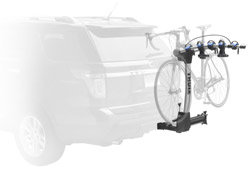 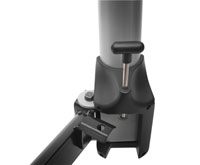 The easy-to-use lockup pin secures the mast section of the carrier in all positions.
View larger 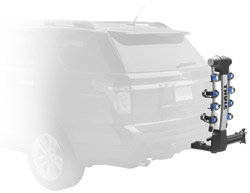 Bike arms fold down and out of the way when the carrier is not in use.
View larger

The 9027 Apex has a four bike carrying capacity. Stowed bikes sit on top of Thule Hold Fast cradles, which are attached to bike arms that fold up and down from the carrier’s mast section. Hold Fast cradles feature a soft, rubberized texture that cushions bikes and heavy-duty rubberized ripple straps to hold them tight. To provide maximized bike stability, bike arms also feature no-sway cages. No-sway cages are rigid rubberized bike rack components that attach to the lower edge of the bike arm, hanging below the bike cradle (one for each bike). As the top tube of bike frames rest on the cradles, the no-sway cages attach to the vertical tube section of bike frames with included straps. This holds bikes firmly in place without the need of a heavy wheel tray sometimes incorporated into hitch mount carriers. Bikes can be locked to the carrier with a cable lock (included). The cable is retractable, pulling out of the mast section when needed, and automatically stowing there when not needed.

What’s in the Box

Listed below are some that graphics of Thule 9027 Apex Swing Away 4 Bike Hitch Rack: